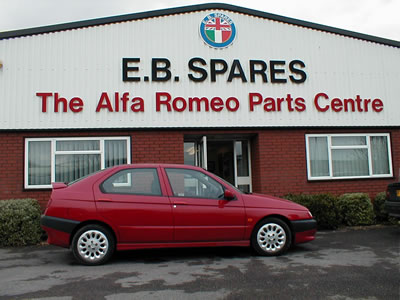 Latest parts and technology at our fingertips—with 35 years experience and our own depot in Milan we are ideally situated to offer the best possible service and prices you can afford. Running a 145 or 146 can work out cheaper than you expect!

Check the news pages for the very latest parts information

Like it or hate it, everyone can agree that the 145 was the first sign that Alfa was becoming adventurous.

Fiat group obviously had this thing in the early 90's about using the same floor pan for 3 and 5 door options - Brava and Bravo for example. Here it was 145 and 146. Also, they always think that 3 door buyers are less conservative in their tastes. The 146 is a neat little saloon, but the 145 - although common from the A posts forward - was altogether a bit more stylish.

Big front doors are followed by a slight upturned kink in the window line before a cut off rear end. The rear window dips where the wiper is based (centrally) - and Ford have copied this EXACTLY on the Focus. The car is actually a lot bigger than you think - this is no Punto/Fiesta sized supermini, but a full-blown Escort rival. It is as wide as a 155 and the internal space is just about the same, amazingly. Boot space suffers a bit, as this is a touch shorter than the 146.

The range started with the old boxer engines. It was fully fuel injected 16 valves, until the 145 was fitted with the glorious twin sparks.

Engines are 1.6 (120bhp), 1.8 (144 bhp) and 2.0 (155). Earlier versions are a touch less powerful and less Torquay. The 1.8 in particular is a very good buy in this car (it is actually a 1747cc, so amazingly powerful). It costs quite a bit less, is more economic of course and usually drops the car one insurance class (insurance is typically group 13 to 15!). The 1.6 still goes well, though is geared lower to compensate for a higher peak torque point. It is amazingly economic though - returning 30+ around town.

All engines are 16 valve, and are Twin Sparks where each cylinder has two spark plugs, the second, smaller one, firing on the exhaust stroke to clean up emissions primarily - presumably allowing the engines to run a little dirtier and more powerfully on the main stroke in the first place. Sounds expensive, but the plugs last 60,000 miles. Servicing is now 12,000 miles and is not extensive.

All engines rev so beautifully all the way up the range, red lining at 7,000 rpm. They don't falter and never seem to run out of power - Jeremy Clarkson said (whilst pouring scorn on the 2.4 JTD diesel), "what is the point of an Alfa engine that runs out of steam at 4,000 rpm) when all other engines are gathering themselves together for a glorious assault on the upper reaches of the rev band" (or something along those lines!) Get the picture? The 2.0 litre is even better in that it gets counterbalancing shafts too.

Unlike the 146, the 145 top of the range 2 litre gets a better hot hatch treatment in the Cloverleaf format. Still quite understated, but with body coloured sill extensions, roof lip spoiler, green cloverleaf crests...

All 145s now come with good equipment - 4 airbags for example, but the interiors are not the strong point. Al
fa did not produce a RH drive version of their third generation interior, which is markedly better. Instruments are OK, though a bit limited for an Alfa, but the central dash is big. Flat and quite ugly. In front of the passenger the whole dash is cut away, giving a lot more space, but make the glove box a sock box down by the passenger's feet - and so tiny too.

Enough of the interior - Which? Said it lacked storage space! Well I'm glad if which readers won't buy it because of that!

Engines aside, it handles well, though the car seems slightly tall. Steering is fantastic- the best set up you'll find anywhere with the now legendary (well...) fast rack steering taking just 2 turns lock to lock (most cars take 3 minimum). The wheel is small because the power steering assistance has to be great. The steering lacks quite the full feel of the older set up, but its responsiveness makes up for it 9reportedly this is better on the 147)

So, all in all a practical, stylish, sporting alternative - as Alfas always have been. Thankfully they are starting to make cars properly - though in the 145 not up to top German or Japanese standards. They certainly style them better and better, and they also show no sign at all of being capable of producing anything less than the best engines around.